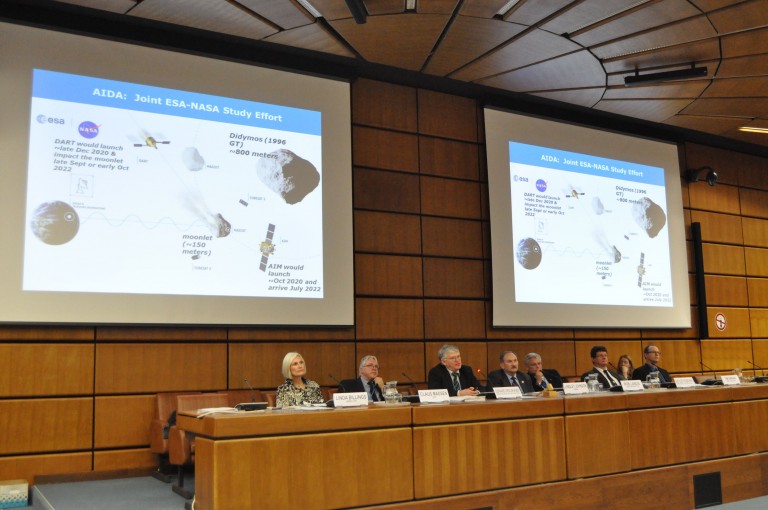 On February 18, 2016 IAWN and SMPAG held an Open Forum associated with the 53rd session of the United Nations Committee on the Peaceful Uses of Outer Space Science and Technical Subcommittee. The primary purpose of the forum was to provide the community with information on current and worldwide NEO efforts, and also to help stimulate interest to allow for broader, worldwide support for detecting, tracking, warning and mitigating a possible future NEO impact.

The first speaker was Rob Landis also from NASA's PDCO, who provided some history of the formation of IAWN, the charter, and current status of some of the programs. His presentation is here.

Detlef Koschny of the European Space Agency presented the status of several efforts underway. These include initial construction of a 1-m 'fly-eye' telescope capable of surveying the entire sky every few nights and an update the NEODyS-2 program which computes orbits and impact probabilities for all NEOs. ESA is also interfacing with local agencies in disaster preparedness in the unlikely event of an impact in the area. Detlef's full presentation is located here.

Linda Billings, from the National Institute of Aerospace and currently a consultant with NASA's PDCO presented and discussed communication efforts, as well as challenges, surrounding NEOs and potential impacts. Linda stressed clear and precise communication, and using existing well-functioning communication models currently in place for other areas such as the World Health Organization's outbreak communication guidelines. Her entire presentation is here.

Claus Madsen of the European Southern Observatory presented on ESO's ability to observe very faint asteroids with the large telescopes at their disposal. In the presentation here, Claus shows some of the images of faint NEO recoveries and also lists the number of objects where ESO observations have removed any possibility of future impact.

Gerhard Drolshagen, also of ESA, presented a discussion of Space Mission Planning Advisory Group functions and listed the current entities with membership in the Group. Gerhard also presented on several space missions, some operating and some in planning stages, that will help our current understanding of science and technology requirements for future asteroid deflection.