The Smallest NEOs: Recent Meteorite Impacts and Their Recovery

(Sept 2018) In the last few months, 2 small NEOs (known now as meteorites once they are on Earth) have been recovered after impacts with the Earth. Couple this with the impact of 2018 LA, and the search for meteorites from that impact, and we have had a pretty busy few months in the meteorite arena.

For NEOs a few meters across, we expect a few harmless impacts per year, so the current busy period is to be expected. However, having meteorites to recover from these events is a touch more unusual. The reason is that the Earth is covered largely by water (over 60% of the surface area), or forests (another 15+%) and meteorite recovery from these areas is difficult to impossible.

From an IAWN perspective, we care about these impacts as they give us a chance to exercise our detection and warning machinery, and also to predict accurate locations on the ground where objects will fall. In the unlikely event a larger impactor is on the way, we want to know how well we'll do predicting when and where it will hit. Further, by locating meteorites we can get specific compositional information that is impossible to obtain any other way. Meteorite recovery increases our knowledge of the physical properties of NEOs. 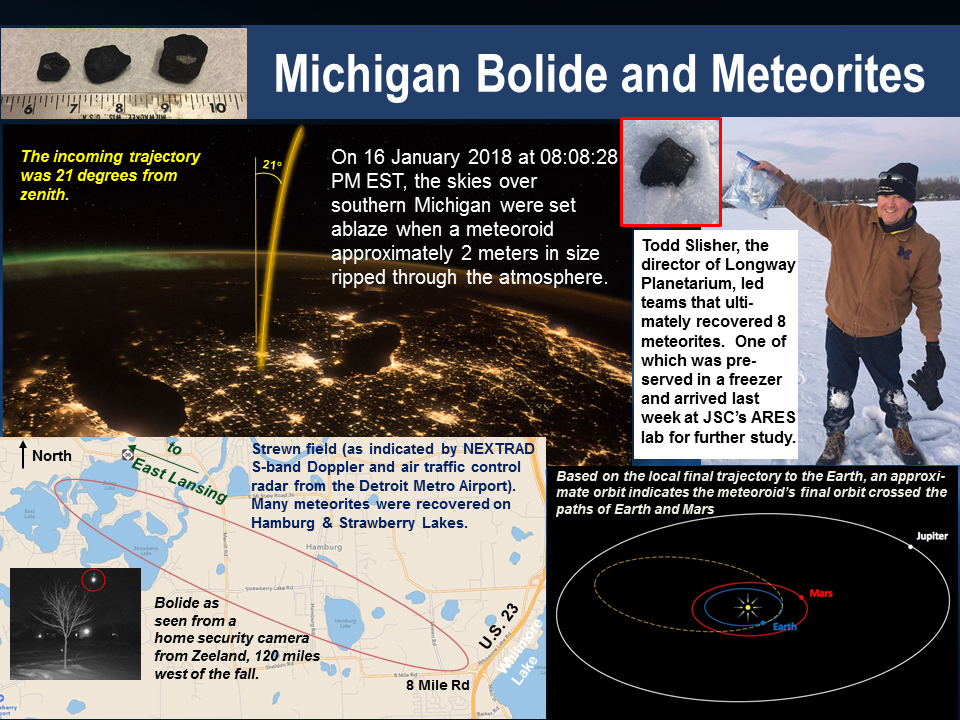 On 16 January of this year, a bright meteor was observed in the skies over Michigan in the northern United States. The object was observed on several outdoor security cameras and as well as dashboard cameras in cars. The object had the good fortune of falling in the wintertime, when locating fragments on ice-covered lakes is easy, and also falling near a planetarium, where the director could organize meteorite searches! Todd Slisher of Longway Planetarium and his teams were able to recover several meteorites.

On 2 June 2018, Richard Kowalski of the Catalina Sky Survey discovered a fast-moving asteroid that was quickly determined to be on an impacting trajectory. This was only the third discovery of an impacting object before entry into the atmosphere; all 3 have been found by Kowalski (!). The object was discussed on these pages previously (need direct link to our 2018 LA short article). The first meteorites from 2018 LA's impact were recovered in mid-June.

Once again, Russia was the site of a small impactor. On 21 June of this year, a meteor was observed from various dashboard cameras and security cameras in the region south of Moscow. The object came in at a steep angle, from almost directly overhead, and exploded about 45 degrees above the horizon. The Karmaka Meteorites page details the hunt for meteoritesshowing how the researchers selected the locations to search, the meteorites, they found, as well as some of the videos documenting the fireball before it hit.

As NEO detection technology and international interest in impacts advances, we at IAWN expect to have more small meteorites to discuss on these pages in the future.