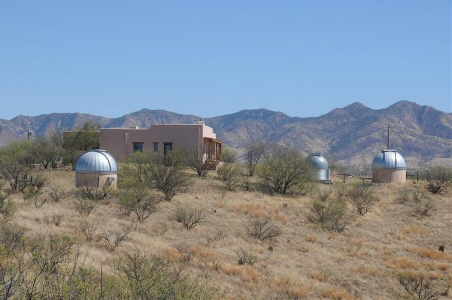 The view of Tenagra from the southwest.

Tenagra Observatories (Minor Planet Center observatory code 926) has been involved in providing NEO follow-up observations for the last several years. The owner, Michael Scwhartz, has graciously answered some questions and provided us some photos to allow readers to get a glimpse into an amateur-turned-professional observing station that is now a main contributor to NEO follow-up.

Tim Spahr (TS): How did you get interested in astronomy?

Michael Schwartz (MS): I fell deeply in love (with astronomy) when playing in the school yard and the sun went down. A man had set up a telescope and asked me if I wanted to have a look. Amateurs love to share and that is one of the endearing things about them. I walked over and looked into the eyepiece. I saw Saturn. For whatever reason my mind could only think/feel "Perfect and beautiful. Beautiful and perfect." Not only was I hooked but the hook was set deeply. I was never the same.

MS: ...off to the university to become an astronomer. Life always (not sometimes) throws you a curve ball that you can't hit. I came out with a degree in archeology. Then a degree in physics after some wild world travels. Then to graduate school in human paleontology. Then marriage, a family, started a software company, built it up for 17 years and sold it. I was 47. The year was 1997. I had some extra pocket change. Then I saw these ads for a strange and wonderful device called a "CCD camera". I bought a Celestron 11 on a Losmandy mount and SBIG's brand new ST6. I hauled it out into the back yard and imaged the Horse Head Nebula in 60 seconds. I think I wept. After a while I was thinking more and more about what this amazing device could do. I was living in Oregon and moved out into the country. I build a backyard roll-off roof and put in the first Bisque Paramount, the amazing little AP7 (the first camera with a back illuminated chip) and a used Celestron 14. I knew exactly what I wanted to do: Be one of the first amateurs to find extragalactic supernovae. Everyone said it couldn't done so this spurred me on even more.

(TS editorial notes - after a bunch of research into automation...)

(TS editorial notes - MS eventually discovered lots of supernovae, which when used as 'standard candles' to determine distances to galaxies, helped astronomers determine the expansion of the universe. This resulted in the 2011 Nobel prize in physics to Drs Perlmutter, Schmidt, and Riess ...)

TS: It seems a large shift in goals from supernovae to NEOs. How did you end up changing your interest to NEOs? 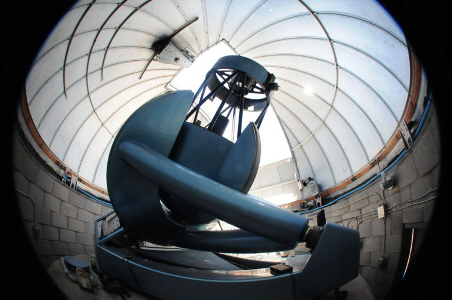 MS: My bug for discovery got even stronger. Throw in some automation and the telescope was becoming a hell of a great tool. Now, where else could this be applicable? Asteroids and comet discoveries! In 2010 I added a second telescope, an 16" f/3.75 corrected Newtonian (now named "Pearl"). This small but mighty telescope has a field of view of 1.35×1.35 degrees. The software arsenal was beefed up with a real-time object movement detection system and this telescope was pre-programmed to search different parts of the sky every night. Yes, I had stiff competition by large, professional telescopes whose job it was to discover NEOs. Ways to work in between their legs and second guess where they would be looking was a job to be reckoned with. One way was to use a program that could hunt close to the galactic plane where there were so many stars that they would overload the detection algorithms used by these major search installations. The other way was to add image subtraction so the auto detected moving bodies could be more easily found with the background star trails eliminated as much as possible. Many ordinary main belt asteroids were discovered. The total discovered NEOs was about 17. Plus 11 comets. One of them named "Tenagra-Tombaugh" because it was first noted by Clyde Tombaugh in his search for Pluto under the direction of Percival Lowell at Lowell Observatory in Flagstaff, Arizona.

TS:You "transitioned" from amateur to professional. At what point did you think that you'd be able to run the operation professionally? (NB, in english, amateur in this context simply means 'unpaid'; we often refer to amateur astronomers as 'unpaid enthusiasts' or 'unpaid experts') 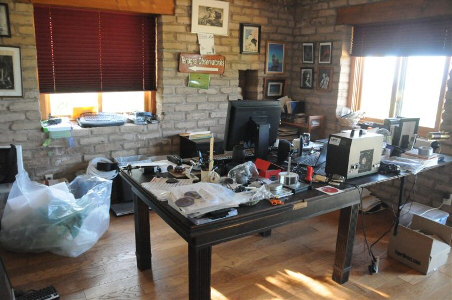 Mission control, a view of the control room at Tenagra

TS: What is the hardest part of the work?

MS: The most difficult part of my work is now that I have expanded I have to "manage" a staff of sorts. But I have successfully done that with my 17 year software business so if I have chosen my employees wisely then things should be okay.

TS: What is your favorite part of your work?

MS: I have two important favorite parts of my work: (a) I love the challenge of making things come together, from personnel to equipment. And (b), that I exceed the expectations of NASA and other NEO researchers with the output of work that I have predicted. That I make a genuine contribution to science.

TS: Do you have anything you'd like to share with readers and other potential or future IAWN team members? 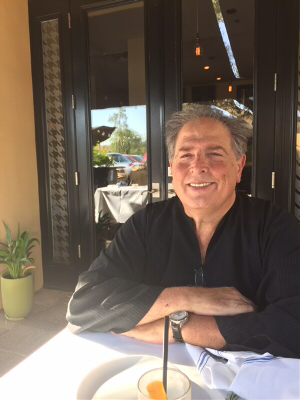 Michael at home, between observing sessions

MS: Have heroes, live your dreams and leave no stone unturned. When you feel like quitting give yourself a good talking to and remind yourself of the powerful personal forces inside of you that caused you to take this path. Never be afraid to ask questions if you can't find the answer somewhere else! Being shy is not healthy. Be competitive but mostly with yourself. You can get lost trying to beat the other guy. Finally, take a walk out of the control room every now and then and have a look at the sky. Take your binoculars if you wish. Stay connected with the cosmos on both levels: emotionally and scientifically.

Foster your "can do" attitude and let your "can't do" aspect fade to black. It is impossible to know who will develop these distinct ways of approaching things in any of life's endeavors. But if you find that in general life has gifted you with a "can do" attitude then feed and nourish it well. If a "can't do" part starts to assert itself you must learn to give it a gentle speech and invite it to go away. Be gentle with it and recognize it for what it is: An sudden realization of inadequacy that makes you feel as though you can't take the next step.

In general this means giving yourself a pep talk. Try to be positive and count your successes and failures. Own them all. They are yours. They are not the fault of other people or situations. When you own them they don't own you.