2015 a Record Year for NEO Discovery

2015 ended with the highest NEO yearly discovery total (1560) in history! Congratulations to all the discovery and follow-up teams on this accomplishment.

The IAU's Minor Planet Center maintains this page (updated daily) that tracks the number of discoveries by individual surveys. A quick glance shows most discoveries, as been the norm for the past decade, are made by a few of the large NASA-funded surveys. (for graphical information on historical discovery rates and a deeper dive into the subject, look here.)

Below is a snapshot of the MPC's 'yearly breakdown' page, as well as a bar chart showing the same information: 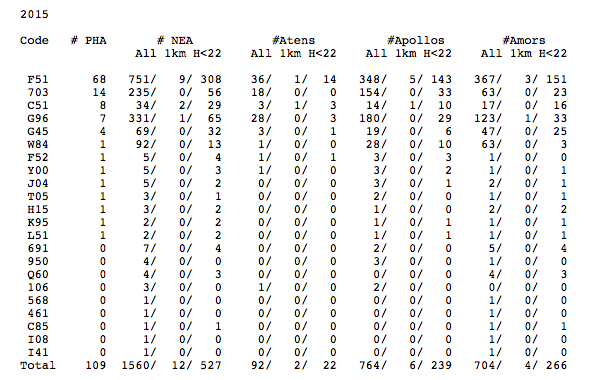 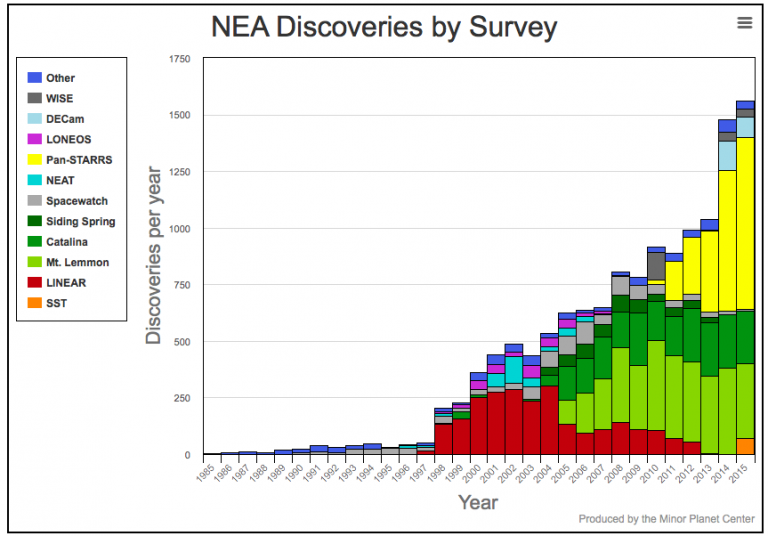 On the lefthand side of the table is the MPC-assigned observatory code. Observatory codes give the precise latitude, longitude, and elevation for each telescope location; this information is necessary for precise orbital calculations. The main discovery stations are as follows: Pan-STARRS (F51); Catalina Sky Survey (703); NEOWISE (C51); Mount Lemmon Survey (G96); LINEAR/Space Surveillance Telescope (G45) and lastly DECam NEO Survey (W84).

In order to compute precise orbits for minor planets, positional measurements (called astrometry) are required in the days, weeks and months post-discovery. This astrometric follow-up is just as important as the discovery observations. Without these, most new NEOs would be lost or have arcs too short to compute the orbits well enough to evaluate the possibility of impacts with the Earth in the future. Thankfully there is a dedicated group of follow-up astrometrists - many of them from the amateur observing community - to provide critical data. Below are several key follow-up stations around the globe; for a full listing of others check the MPC's follow-up statistics page here.

H21 & 807 - Astronomical Research Institute. Operated by Robert Holmes, this used to be an amateur organization and is now funded by NASA. The team uses telescopes in northern Illinois and also Chile.

291 - Spacewatch. Operated by Robert McMillan and team at the University of Arizona. Spacewatch was the pioneer in digital discovery and astrometry of minor planets in the late 1980s and early 1990s. The 1.8-meter follow-up telescope is now among the world's best at observing faint NEO targets.

926 - Tenagra Observatories. Operated by Michael Schwartz and Paolo Holvorcem. Another amateur-turned-professional follow-up team that is now funded by NASA. The telescopes are operated from Patagonia, Arizona.

Scanning further down this list shows many observatories scattered around the globe making useful contributions to follow-up, including two teams in Italy (160 Castlemartini and 204 Schiaparelli); one in Arkansas in the US (H45, Arkansas Sky); England (J95, Great Shefford). Please note that many of the professional survey teams provide a large volume of follow-up observations as well.

A future posting will provide more detail on the work of these follow-up stations, with an eye on how others might join in contributing to worldwide astrometric follow-up efforts.