Understanding Orbital Uncertainties in the Context of Impact Predictions

I: Introduction to Elliptical Orbits

This is the first in a series of articles detailing the concept of orbital uncertainties as it relates to impact predictions. Celestial mechanics can be a complicated subject, but here we'll try to distill some of these difficulties and render the subject a bit more transparent. 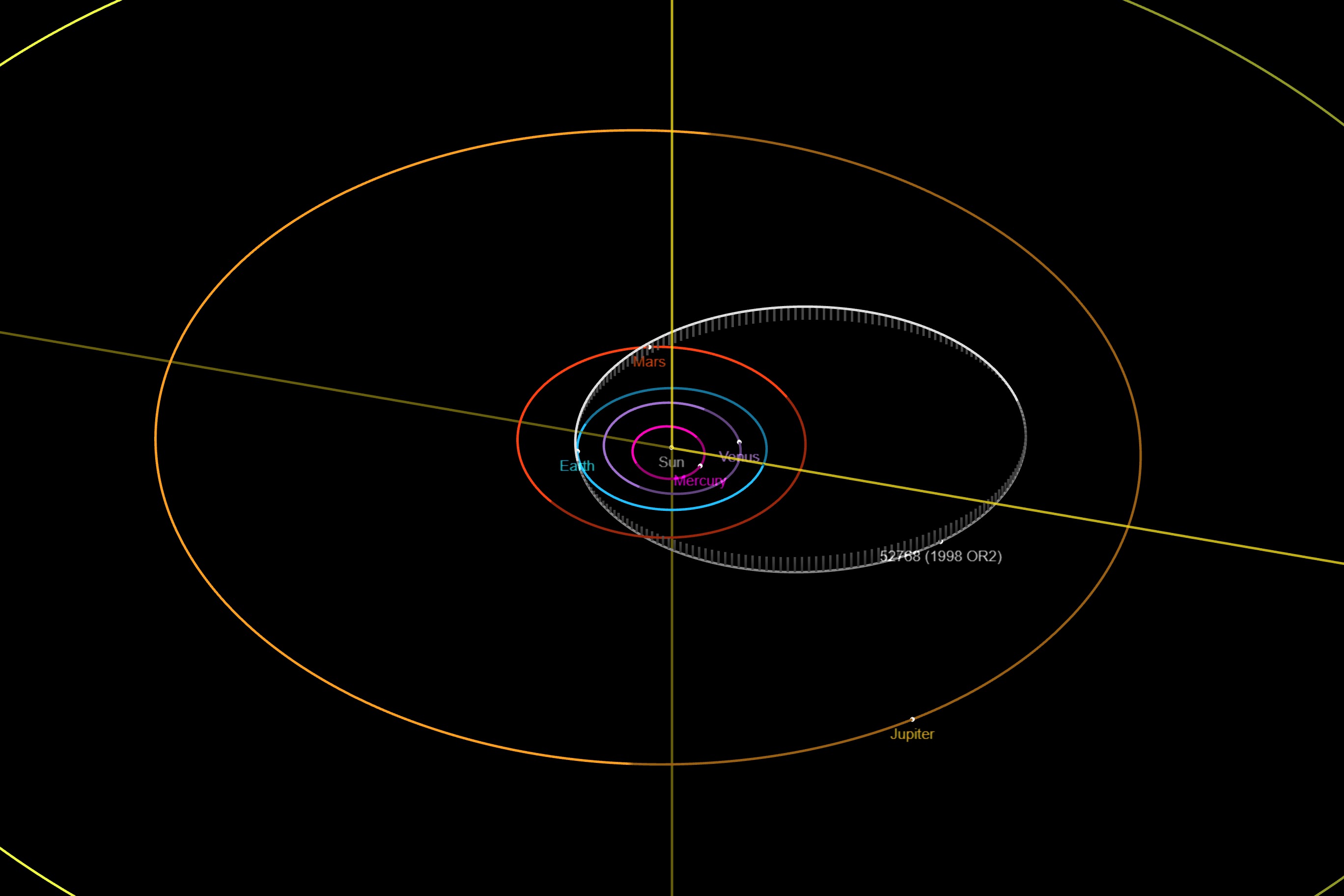 Graphic showing a typical asteroid orbit (white) as compared to the other planets in the solar system.
Credit: JPL Small-Body Database Browser

For the particulars of this discussion, we'll concentrate on asteroids or comets that orbit the sun, as this simplifies the problem substantially. Yes, we are aware of 2 interstellar objects known so far (NEO News and Chasing 'Oumuamua) and undoubtedly we'll find more of these in the future. We will discuss orbit/trajectory calculations for these at a later date. For objects orbiting the sun we have a major constraint-we know the orbit is elliptical, and we know the main gravitational force acting on the body is the sun. Objects in elliptical trajectories follow predictable paths and this allows us to constrain the problem mathematically. In fact, to describe an elliptical orbit in space, we only need to determine 6 numbers. These special numbers are called orbital elements and will slowly be introduced into the discussion.

So now imagine you're on the Earth, looking out at this asteroid as an observer. Over the course of a few hours the asteroid will probably not move that much across the sky. Think of the other planets-say Mars or Jupiter. They can be seen to move over daily timescales, but not very much! Now imagine that you're trying to predict where they will be in a few weeks-this might be difficult from just the few observations you made on a day or two. This is the standard problem in orbit determination-where will that object be at a specified time in the future? The answer is "we don't know exactly, but with more observations we will make better predictions"!

Another thing one can notice about the orbit of the asteroid is that it is elongated, and is "larger" than that of the planets. These two things we can glean from a photo are important quantities for predicting where our object will be in the future-the eccentricity tells us how stretched the ellipse is, the semi-major axis tells us how large the ellipse is. Looking at a side view of the solar system, from the plane of the Earth's orbit, we can see that the orbit is inclined with respect to that of the Earth. This tilt is called the inclination of the orbit. These three quantities-eccentricity, inclination, and semi-major axis are three of the six orbital elements we need to know in order to predict the future location of our asteroid! While we have described them in general terms here, understanding what they mean will help understand orbit uncertainties as we go forward.

In terms of generalities, solutions for elliptical orbits are difficult for nearly circular orbits, orbits inclined little but most importantly for very short observational arcs. From our perspective on Earth, even if we observe an object as it has moved over the course of one day, this might only be a fraction of a percent of the orbit of the object. In fact, for these sparsely-observed cases, just about any orbit can fit. This is the main reason why you'll hear orbit computation experts say they like longer arcs. The longer the observed span of observations, the better the predictions will be.

The next piece in this series will include a full description of elliptical orbits and some more generalities surrounding orbit computation.